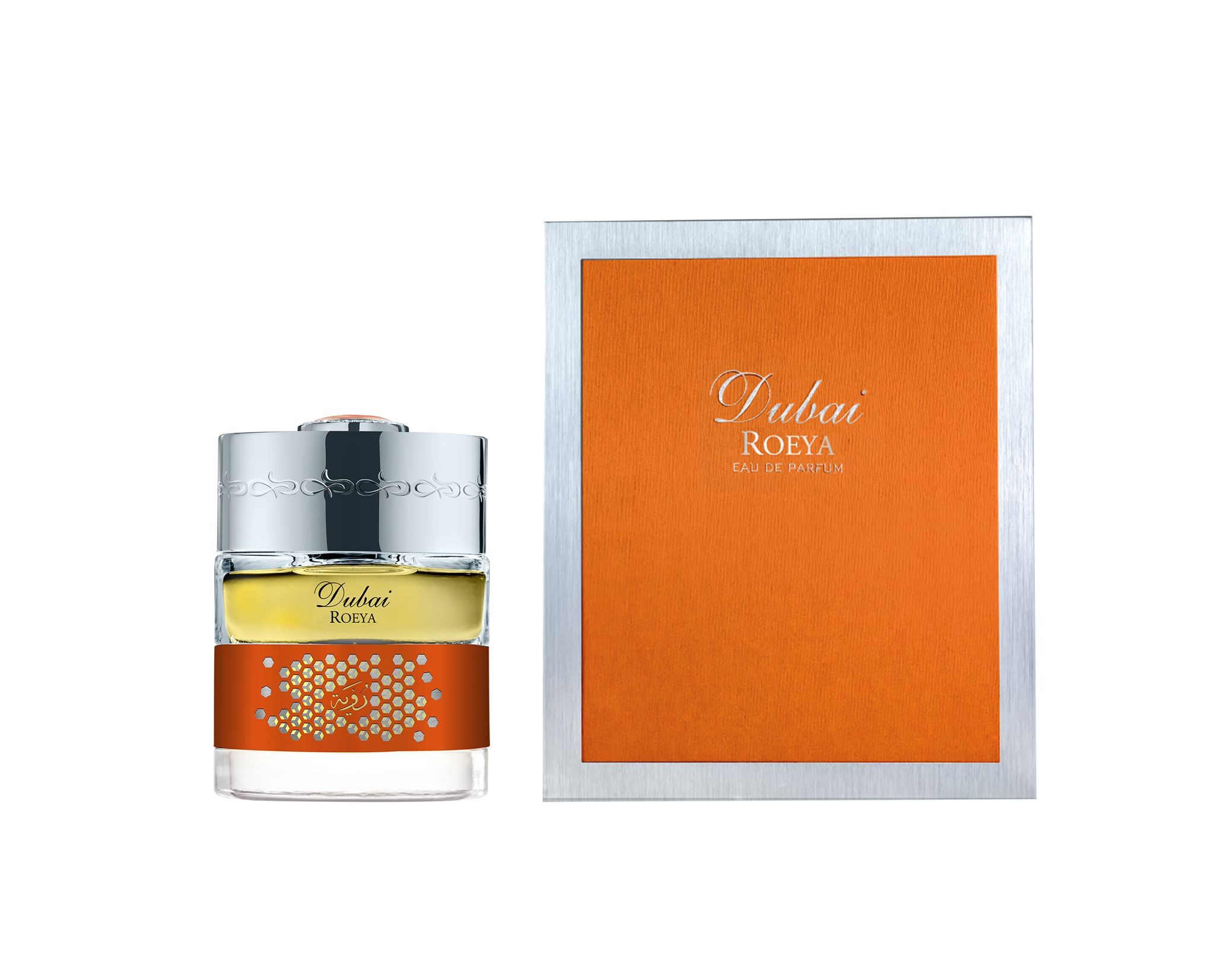 by the Futuristic Vision of Dubai

through the sands of time

with infinity in the palm of her hands.

She invites me to step through eternity’s sunrise of burnished gold and glass,

to look upon the land of dreams and dunes

of tomorrow’s time that’s yet to pass.

Over the engineering marvel of future's eye

and under an entrancing dome of light,

together we bear witness to tomorrow's land. With ever-rising spires, touching the sky,

she leads me on a journey of grandeur

to the “Dubai Roeya”, a vision of the future. Bottled magic, a voyage for the senses. Beaming with effervescent happiness.

This, is the tribute to infinite possibility.

Of exquisite elegance, inspired by time,

hear the Spirit of Dubai, joyously

speak in the language of sunshine.

Nabeel Perfumes are writing a new chapter in their history of fragrances. Inspired by Dubai – a city that embraces a wide variety of scenery, captivating contrasts of ancient tradition and the luxuries of a cosmopolitan society, they proudly present their new fragrance line called ‘The Spirit of Dubai’.

A vision of Mr. Asghar Adam Ali (Al Attar), the pioneer who founded Nabeel in 1969,

that drive the thriving metropolis of Dubai - Innovation, World-class Quality, Luxury, Utmost Creativity and Craftsmanship. Each of the fragrances encapsulates ‘one’ outstanding aspect of the city.

The ‘First Generation’ niche collection launched in 2015 and embodies the very essence of Dubai - the sea, sand dunes, Arabian heritage, Arabian horses on the playground, Oud and Arabian hospitality, the

opulent luxury, promising skyline & the futuristic vision of the city of hope. Each of the nine ‘First Generation’ fragrances chronicle a particular element in the city, created with the intention to capture and ignite the wearer’s imagination.

The Spirit of Dubai's ‘Second Generation’ ultra-niche collection was created as an evolution from the First Generation niche collection. This luxurious line bridges the gap between the past, present, and future. The scintillating notes are a blend of the city’s ancient traditions and rituals, and its modern hallmarks culture.

The Spirit of Dubai plans to reveal the launch of its latest novelty in fragrance, the ninth element in the First Generation Niche Collection representing the Futuristic Vision of Dubai city at the renowned 12th Edition of Esxence in Milan, Italy. (Booth #M26)

Your window to tomorrow's world is a potent mix of elegant notes that ups the ante on your vision of the future. Think top notes like neroli, cashmeran and mandarin, with oud, ambergris, ambrette and fir at the base. Orange Blossom and Jasmine Sambac are a few of the lilting middle notes that play with the senses. Always one step ahead of the curve, the progression of the scent - all at once, woody, spicy, floral, ambery - is inspired by the sands of time.

This fragrance comes enveloped in a joyous orange band punctuated with windows into a glass bottle and crowned with a cover of carved chrome. This glass bottle shines with Arabic calligraphy that speaks of Roeya in an artful geometric pattern.

Housed in a futuristic orange pouch, the bottle is held within an enigmatic orange cushioned frame box.